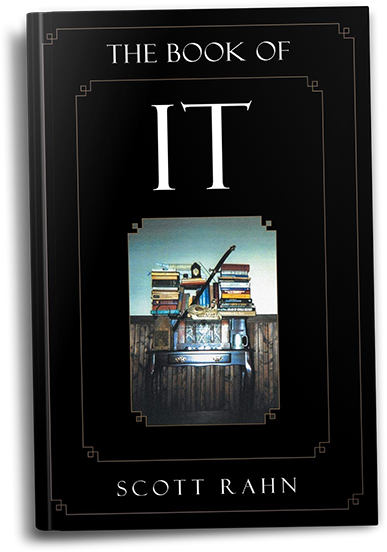 THE BOOK OF IT

This book, The Book of It, is not the ultimate and single explanation of what its author has uncovered by years of reading, research, and listening to the words and teachings of others. The fact is that the only part of It that can be described by a single strand within.

The Book of It explains, at times cryptically, the journey of its author through the strands of It that he himself has encountered – strands passing across history, through literature and religious texts and philosophies, and even into the legends of the world. It can easily be seen as the tale of unknown centuries of people easily manipulated by virtue of what they wish to have and how they are taught or led to obtaining it, along with what they are oftentimes kept willingly ignorant of as they unknowingly push an apparently undying school of thought and way of life crashing forward through time.

It is not so much the story of some grand conspiracy as it is the story of people blinded by imagined desires and glories. Individuals working at the same time, but neither with nor without the perceived aid of each other down the path to attaining. It contains a strand of common legends, stories, lessons, and teachings that are somehow known the world over. Stories of once-great empires and their cities and peoples now long forgotten, at least one great war, masters who exploited mass populations kept in ignorance, of the same monumental disasters, and the destruction of it all over and over so that another chance can be given to creation along with the chance to finally build a truly eternal civilization and culture and more.

“The clock that most recognized remnant of an ancient and sacred number system that dates back to at least the very beginnings of our present civilization.”

“I tell you what,” he said, still laughing, “If you put aside all that you believe that you know to be real long enough to hear my own story and my own thoughts about the sword and its origin, then just maybe I will tell you.”

“In the words of Harun Al-Rashid, caliph of Baghdad and compiler of the tales known as The Arabian Nights, “My friend, more is concealed than is revealed. Each revealed leads to more concealed. Each concealed leads to undreamed of heights.”